Ian Rush remained one of the most talented strikers on the Big Island of the United Kingdom in history. Born on October 20, 1961, in St Asaph, North Wales, he became a Liverpool star after being completely devoted himself to the artistic side of football and pursued a very successful career based on his simple play and love for football for the “round Goddess” and Liverpool.

Today, Ian Rush is one of the football heroes of all time, considered the all-time leading scorer and player for the Merseyside club, scoring a total of 346 goals in all competitions during his two seasons at the club. Internationally, he has made 73 appearances with the National Team of Wales and remains the top scorer in the history of the “Dragons” with 28 goals between 1980 and 1996.

Let’s go back in time, to May 13, 1980. A tall boy who will make his debut alongside Kenny Dalglish wearing the No. 7 on the back of his T-shirt which ended in a 1-1 draw with Ipswich.

The first to believe in him was Bob Paisley who was asked about Rush’s choice of key and replied: “Give him some time and he will be the top scorer in the country, and when the time comes you will only ask me when and why he is not playing.” And that exactly happened. It was a matter of time to reveal the incredible talent of the young Welsh “Dragon” that will surprise everyone with his executive ability in “Anfield”.

On September 30, his first goal will be recorded for the Liverpool club from a total of 346 games of his career, in a 7-0 win over Oulun Pallosseura for the Champions Cup. Since that day Rush has not stopped scoring, repeating the scenario with another two goals in a 3-0 win over Leeds, managing an astonishing 30 goals in 49 appearances at “Anfield” with 1 goal per 1.6 games! Due to this incredible player they won the championship however at the beginning of 1982 they were placed 10th in the League. The Welsh international was not only a charismatic scorer, but also a defensive technician for the opposing team, as he was constantly pushing against their defence with his great insight and Determination. Liverpool’s gun, with the one and only Rush, they managed to win the league as well as the following year, as he emerged as the top young footballer of the year, scoring 11 goals in 24 league games. An event that might seem like a small harvest for him however he managed to score 4 goals in the Derby with Everton in a 5-0 win over the Reds!

In the 1983-1984 season, Rush made the absolute unbelievable record by sending the ball to the net in 65 games, with Liverpool winning the Premier League, while dominating AS Roma 4-2 in the Champions League final in the penalties after a (1-1) in the normal duration. Next year, however, the footballing planet will be shocked by the tragedy of Hazel and Liverpool’s failure to win a title. His first round at “Anfield” in the 1986-1987 season will find Russ breaking the 30-yard barrier again, scoring a total of 33 in all competitions while Liverpool make the double. 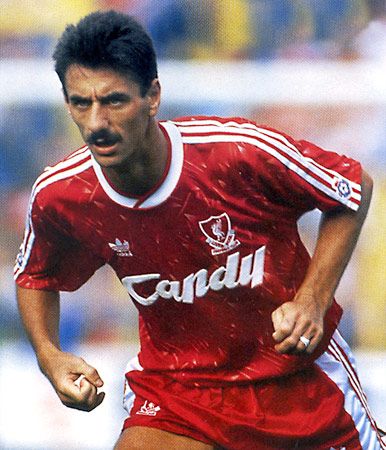 A stop in Italy and back home to “Anfield”

On July 2nd 1986, a new chapter opens for him with Juventus announcing his acquisition in the transfer market, leaving Liverpool on loan, scoring 40 goals in total thus keep in mind without winning any trophy. And while the challenge of every striker in the Campeonato with strong and closed defensive styles is annoying and not easy for any striker, Torino’s environment made Rush feel suffocated and not at home, therefore he hoped for his return to English soil as soon as possible.

“Anfield” thus welcomes their host, one of their most loved players, who, by June 1st 1996, after more than 300 goals, will bid farewell to the club he loved and worshiped more than anything else in the world. The continuation of his career will find Rush wearing the jerseys of Leeds, Newcastle, Sheffield United and Wrexham, and will write an epilogue of his active football career with that of Sydney in Australia.

In the 2004-2005 season the great striker will take over the reins of Chester, the team where he started, thus without accomplishing anything remarkable. He is now the ambassador for the Liverpool academies around the world, acts as a consultant to the Football Association of Wales, as well as a football journalist.