Granada may be a relatively insignificant team, but it is also the only team whose shirt was worn… by the three Maradona’s, at the same time in the same game! 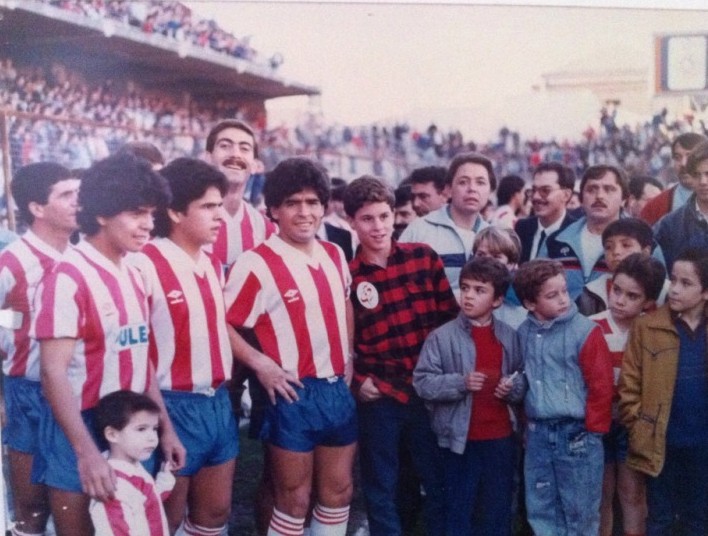 As we all know, one of the three was Diego and the other two are his brothers, Lalo and Hugo. “Diegito” may have been the most important person on the field to watch, but both brothers had an interesting career. Hugo played for Ascoli, Rayo Vallecano and Rapid Vienna, while Lalo a loyal player wearing the Boca Juniors jersey, whilst he also tried his luck in Japan and Canada. In fact, for Lalo, Diego emphasised how at that time he was much better than even himself!

However, the three brothers were happy to play together in little Granada! When the Spanish club brought Hugo to the roster, Granada’s people thought of celebrating his acquisition, therefore they hosted a friendly and invited the other two players (Diego and Lalo) to the family.

World football legend Diego Maradona, of course, set a condition for playing in this friendly, before wearing the Granada jersey. He requested that the Opponent in this friendly match should be a soft team, so that no opponent injures him. Thus, the swedish team Malmo was selected and the game took place on November 15, 1987.

Of course, the whole Maradona family was present at the stadium. Parents, their wives, even Dalma, Diego’s daughter, (baby) then. At the airport, in fact, many fans had gathered to welcome the great Maradona, who was then playing in the Italian team, Napoli. As soon as he stepped his foot on ground, people shouted his name rhythmically and threw papers at him, celebrating his presence.

Granada even had to pay 3.5 million pesos to charter a plane to Naples. “Diegito” scored, wearing the “9” as he had left the “10” to Lalo. In Conclusion, Granada won 3-2 and this game remained in football history.